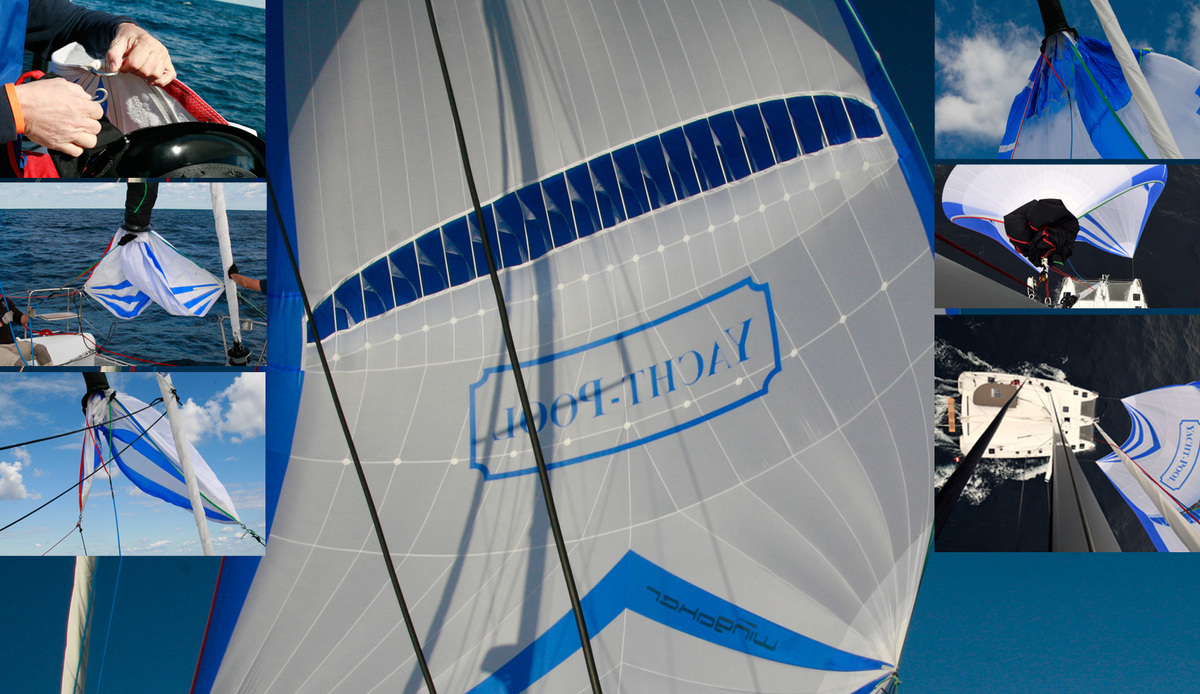 Aviation engineer Manfred Kistler began the development of the first WINGAKER (then still called Parasail) in 1998. The forced-air-filled wing element with an opening above and below the profile, currently still manufactured by other aerodynamic spinnaker manufacturers,  met the expectations at the time and offered very good absorption of wind gusts. The amount of lift provided by the profile was relatively low.

There were, however, many disadvantages including poorer performance in the low wind range and the exhausting and lengthy process of recovering the sail.

The development of the second generation of the WINGAKER aimed to eradicate these weaknesses. The incorporation of patented Skywalk innovations such as the JET FLAP significantly improved the performance, and the wing element received a rounder radius for a better performance and to optimize the process of recovering the sail.

But the real breakthrough in performance came from the use of single skin technology combined with closing the upper opening in the wing.

Experiments with an additional opening above the existing wing element immediately caused a noticeable drop in performance and were therefore immediately rejected in the initial phase of development.

The shape of the sail and the direct connection of the aerodynamic cap element to the upper part of the sail now ensured an ideal geometry and correspondingly lower pressure loss in the sail.

The light wind performance exploded. Setting and recovering the sail also became faster and easier, since the trapped air did not need to first escape from the double skin wing.

Aerodynamic explanation of the WINGAKER - by aviation engineer Manfred Kistler.

With an angle of 5-8 degrees, a conventional, free-circulating airfoil (aircraft) generates 2/3 of its lift by suction on the top surface, and 1/3 by pressure on the underside. Part of this lift is achieved by air deflection.

Quotation from an aerodynamic dictionary: "A wing has to accelerate air downwards if it wants to generate lift."

"This air deflection costs energy, so it generates an opposite force. This is the so-called induced drag, "

With Spinnakers, however, we want to maximize drag  in order to achieve sufficient propulsion. In this sense, maximum air deflection is therefore doubly effective:

The free flow of air around a wing naturally causes great losses: on the one hand by surface friction (on the top as well as on the bottom of the bearing surface) on the other hand by a limited air deflection.

If the angle of attack used is too large to produce more lift, the flow along the top of the wing becomes reduced. This causes a stall to begin and lift will abruptly collapse.

The success from these innovations is remarkable, but limited: an angle of attack exceeding 25 ° can not be achieved regardless of the technologies used, the amount of lift remains limited to a certain extent.

With the WINGAKER, the incoming air is forcibly guided and deflected by almost 90° without stall danger! This is possible because the lift element wing is fixed to the sail body and can initiate the force there. Up to 100% of the incoming air is deflected, and maximum lift and efficiency is possible. Additionally, this technology produces  higher drag from the entire construction (see above) which of course is also a reason why this system does not make sense on a plane, but does make perfect sense on a downwind sail! We need a downwind sail with more drag for better performance! The almost complete impulse drag of the WINGAKER naturally opens up new directions in sail sport.

The JET FLAP was develpoped by the Skywalk paraglider and kite development team. When used with an air-filled airfoil, this gap flap prevents the interruption of airflow and helps ensure maximum performance.

The integration of the JET FLAP into the single skin lift element of the newest generation WINGAKER was the next challenge for the Skywalk engineers.

The wind tunnel is an important tool for testing the effectiveness of aerodynamic ideas. It is necessary to regularly check the validity of simulations in a wind tunnel.

For this testing Skywalk uses various facilities, including the large Daimler wind tunnel in Stuttgart and the open Gust Wind Tunnel as shown in the photo

Insights gained from these tests benefit all Skywalk divisions, regardless of whether they are kites, paragliders or the WINGAKER.

Thanks to these wind tunnel tests, the outstanding performance of the WINGAKER in terms of  "upwind aptitude" and propulsion could be almost perfectly reproduced.